How Do Your Buyers Prefer to Receive Business Communications? 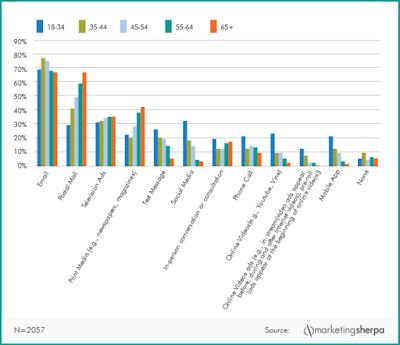 Last month, MarketingSherpa republished a chart that showed how people of various ages prefer to receive business communications. The chart was based on a survey of U.S. adults that was fielded last year and produced 2,057 responses.


This survey did not focus on business buyers, but it did ask participants how they prefer to receive business-related communications. Therefore, the survey results can provide B2B marketers some valuable insights. In this post, I'll focus on the three age groups that are likely to include the vast majority of B2B buyers, and I'll provide a general "rule of thumb" description of the types of buyers that are likely to be found in each age group.
The 55 - 64 Age Group
The table below shows the five communication channels most preferred by respondents in the 55 - 64 age group. Most B2B C-level executives will probably fall in this age group, although it's not that uncommon to see C-level leaders who are younger. 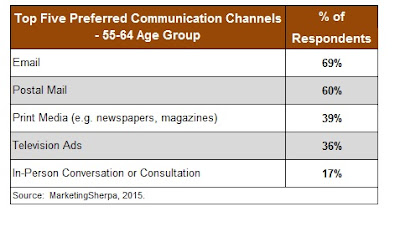 The 45 - 54 Age Group
The following table shows the top five channels identified by respondents in the 45 - 54 age group. This age group is probably where you will find B2B executives who are just below the C-level. It is likely to include business unit or regional managers, as well as functional executives - such as marketing, sales, IT, finance, or operations - who report directly to C-level executives. 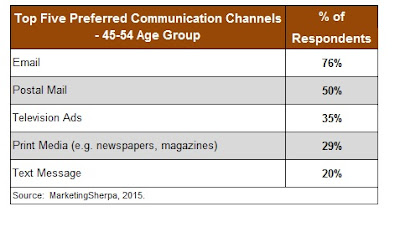 The 35 - 44 Age Group
The table below shows the five channels most preferred by respondents in the 35 - 44 age group. In the B2B world, this group is probably where you will find mid-level executives and managers who influence, but do not make, final buying decisions. These "buyers" are important for B2B marketers because they often perform most of the research relating to potential purchases. 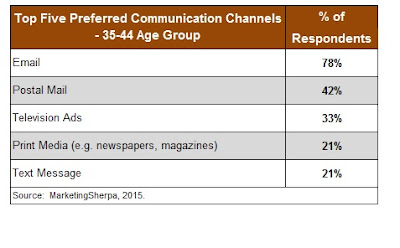 Insights from the Survey
The findings of the MarketingSherpa survey clearly show that people of different ages don't differ as much as we might expect when it comes to how they prefer to receive business communications. For example, e-mail was the most preferred channel, and postal mail was the second most preferred channel for all three age groups. This suggests that direct mail can still be an effective marketing tactic with B2B buyers of all ages. It's also interesting to note that two very traditional media channels - television ads and print media - were among the top five most preferred channels for all three age groups.

The survey also revealed some significant differences among the age groups. For example, in-person conversation or consultation was a top five choice only for respondents in the 55-64 age group. In-person communication was ranked seventh by both the 35-64 age group and the 45-54 age group.

Despite all of the recent focus on social media, it wasn't a top five channel for any of the three age groups discussed in this post. However, it's important to note that social media was the third most preferred channel for respondents in the 18-34 age group, which suggests that social media will become a more important communication channel as the people who are now in this age group take on larger roles in the B2B buying process.
Posted by G. David Dodd at 6:12 AM