During the Cold War, US Army leaders in Europe faced a disconcerting situation. Their mission was to defend NATO members in the event of an attack by the Soviet-led Warsaw Pact. The problem was, US/NATO ground forces were substantially outnumbered. During this period, Soviet army doctrine was to throw wave after wave of forces at defenders until they were overcome. US military leaders were not confident they could win this kind of war of attrition.

To address this problem, the US Army developed a new warfighting doctrine, one that reintroduced the idea of depth to the battlefield. Under the new doctrine, US/NATO armies would extend the battlefield deep on the enemy's side of the front lines and attack rear-echelon forces (fighting deep), while simultaneously engaging front-line forces (fighting close). The objective was to break up the enemy's momentum and deplete enemy forces before they could get into the main fight. The principle of fighting close and deep at the same time remains a basic tenet of US Army operational doctrine. 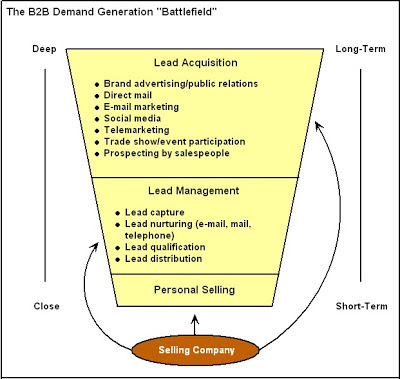 In military doctrine, close and deep describe the distance from the front lines of the battle. In demand generation, close and deep refer to where prospects are in the buying process and now near or far they are from making a purchase decision. As the diagram shows, personal selling is the primary close demand generation activity, while deep demand generation activities focus primarily on lead acquisition. Lead management activities such as lead nurturing and lead qualification occupy an intermediate tier. The diagram also shows that close activities are designed to produce short-term results, while deep activities produce results over a more extended period of time.

To maximize demand generation performance over time, it's critical to have the right balance of effective close and deep activities. When the balance is right, your demand generation system will perform at a consistent, high level. If you don't optimize close activities (personal selling), the negative consequences will be felt quickly. If you ignore or fail to optimize deep activities, the negative consequences can be just as bad, but it will talke longer for them to become visible.
Posted by G. David Dodd at 5:18 AM