Are the 4P's Still Relevant for Today's Marketers

One of the most enduring concepts in marketing is the idea of the marketing mix. The concept became popular in the 1960's after Neil H. Borden published an article in the Journal of Advertising Research. Borden's original marketing mix model contained twelve components. E. Jerome McCarthy later grouped these ingredients into four categories that became universally known as the 4P's of marketing - Product, Price, Place, and Promotion.

In their seminal textbook, Principles of Marketing, Philip Kotler and Gary Armstrong define marketing mix as "the set of tactical marketing tools - Product, Price, Promotion, and Place - that the firm blends to produce the response it wants in the target market."

Given the profound changes in marketing over the past few decades, it's legitimate to ask whether a fifty-year-old model of marketing is still relevant and valuable for marketers today. My answer to that question is emphatically yes, provided that marketers keep two important things in mind.

The 4P's Include More Than the Terms Normally Suggest

The terms used in the 4P model are category labels that encompass more than the literal or common meaning of the terms. For example:


The 4P's Describe What Marketers Can Control, Not What They Must Achieve

The 4P model speaks from the perspective of the selling company. It has always been designed to describe factors or conditions that the selling company controls. The 4P model has never attempted to describe what is required to be successful from the customer's perspective. To use a food example, the 4P's are like a list of available ingredients that chefs can use to create a variety of dishes in a variety of ways, but the 4P's do not provide the specific recipes for dishes that diners will like.

To understand what is required to achieve success with customers, you need another model or tool. One that I've found to be useful for this purpose is the "4A" model of marketing developed by Jagdish N. Sheth and Rajendra S. Sisodia. The major components of the 4A model are Acceptability, Affordability, Accessibility, and Awareness. Each of these major components has two dimensions. I'll be discussing the 4A model in greater detail in a future post. For now, the diagram below shows the four major components and the two dimensions of each component.

The marketing landscape has changed in dramatic and fundamental ways over the past five decades. However, the core objectives of marketing and the elements of the marketing mix are much the same today as they were fifty years ago. So, as long as the 4P's are defined and used appropriately, they're still relevant and valuable for today's marketers.
Posted by G. David Dodd at 5:58 AM No comments:

A Cornucopia of B2B Marketing Predictions for 2015

So far this month, my posts have focused on what will happen in B2B marketing during 2015. In my first January post, I discussed a recent webinar by the Aberdeen Group regarding what best-in-class marketers are planning for this year. In my last post, I described some of the findings of a recent survey by StrongView Systems that asked business leaders about their marketing budget and spending plans for 2015.

While performing research for these posts, I discovered an excellent website developed by Backbone Media. Backbone has collected predictions from nearly two dozen B2B marketing thought leaders, and the website presents these predictions in a very accessible format.

The predictions at the Backbone website cover a wide range of topics. I'll focus on three topics that earned comments from multiple marketing thought leaders.

The Roles of Marketing and Sales

I've written before about the need to forge a tighter integration between marketing and sales, so this is a topic that interests me greatly. Here's a sample of the comments and predictions from the thought leaders.

Over the past couple of years, several research studies have documented the power of video content to create engagement with potential buyers. Several thought leaders believe that companies will greatly expand their use of video content in 2015. For example:
Predictive Analytics

Predictive analytics was a hot topic in marketing circles in 2014, and several thought leaders believe it will play a more significant role in B2B marketing in 2015 and beyond. Some examples:
Whatever actually happens in 2015, it will be an exciting year in B2B marketing.

This month, I'm featuring posts that describe a few of the many published predictions about what will happen in marketing during the coming year. In my last post, I discussed a recent webinar by the Aberdeen Group regarding what best-in-class B2B marketers are planning to focus on in 2015.

This post deals with marketing budget and spending trends in 2015. In late November and early December of last year, StrongView Systems surveyed business leaders from a wide range of industries regarding marketing spending plans for 2015. The StrongView survey generated 377 responses, mostly from business leaders affiliated with North American companies. About 34% of the respondents were from companies with 1-50 employees, while 28% were from companies with more than 1,000 employees. The survey did not provide a breakdown of B2B vs. B2C respondents, but it appears that both were represented.

The StrongView survey also asked participants about their spending plans for ten specific marketing channels or techniques. The table below shows the percentages of respondents who plan to increase and decrease spending on each channel or tactic. 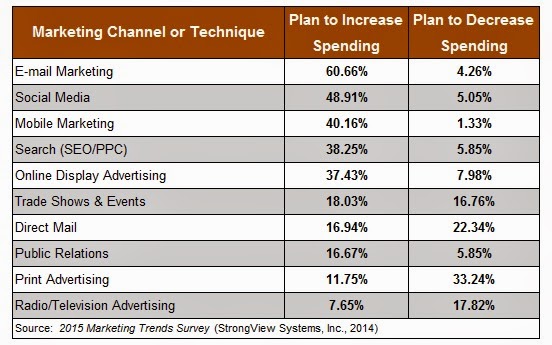 The StrongView survey didn't specifically address spending on content marketing, but several other recent research studies have indicated that many companies will significantly increase their investments in content marketing in 2015.
Posted by G. David Dodd at 5:33 AM No comments:

What High-Performing Marketers are Planning for 2015

We're now well into the prediction season, and it's easy to find articles, blog posts, and webinars that focus on what will happen in marketing in the coming year. The prognostications range from timid to bold, and while I wouldn't bet my retirement savings on most of them, some of the predictions are realistic and insightful.

Recently, I attended a webinar that featured some useful (if not completely surprising) predictions derived from solid research. The webinar was presented by Maribeth Ross, the Chief Content Officer and a Managing Director with the Aberdeen Group. The topic of the webinar was "What Best-in-Class Marketers are Planning for 2015," and the content of the webinar was based on research conducted during 2014 in Aberdeen's customer-facing practice areas.

In this webinar, Ms. Ross focused on two major issues:


According to Aberdeen's research, the top four pressures facing marketers in 2014 were:
To address these pressures, Ms. Ross says that in 2015, best-in-class marketers plan to:
As noted earlier, these predictions are not particularly surprising. The pressures that Ms. Ross identified have been building for the past few years at least, and leading B2B marketers have been focused on marketing automation, content marketing, and sales enablement for quite some time. It's likely that these issues will remain important for next several years.
Posted by G. David Dodd at 7:05 AM No comments: