How Much is a Marketing Asset Management Solution Worth?

Despite these powerful benefits, however, many marketing and financial executives don't have a clear picture of how valuable a marketing asset management solution would be for their company. 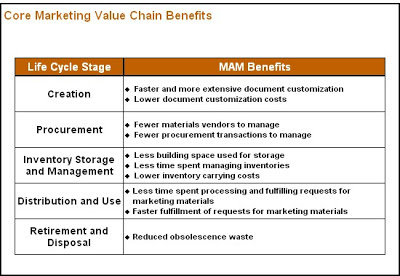 I've just released a white paper that describes the benefits that a marketing asset management solution typically provides and explains how to measure the value of these benefits. If you'd like to obtain a copy of this resource, send an e-mail to ddodd(at)pointbalance(dot)com.
Posted by G. David Dodd at 5:37 AM No comments: Links to this post

In marketing circles, it's been fashionable for several years to proclaim the impending demise of traditional advertising and marketing tactics. Marketing thought leaders have advanced this view in many of the best known and most influential marketing books published during the past two decades. For example:
Based on these predictions (and many others like them), we would expect to see the use of traditional advertising and marketing methods in a free fall. But that isn't happening. According to a forecast published by ZenithOptimedia in December 2012, worldwide advertising spending will grow from about $482 billion in 2011 to almost $574 billion by the end of 2015. In North America, the firm expects advertising spending to grow from $165 billion in 2011 to $195 billion in 2015.

These estimates cover spending in seven types of media - newspapers, magazines, television, radio, cinema, outdoor, and Internet. Except for the Internet, all of this spending relates to traditional advertising and marketing tactics. According to ZenithOptimedia, the Internet will be second largest category of advertising spending by 2013, but it will still lag behind television by a significant margin (19.8% of total spending for the Internet vs. 40.1% of total spending for TV).

In addition, Winterberry Group has estimated that spending on direct mail (another traditional marketing method) has enjoyed modest annual growth since 2009.

So, what's going on? Were Don Peppers, Martha Rogers, Seth Godin, David Meerman Scott, Brian Halligan, Dharmesh Shah, and many others simply wrong? I don't think so, at least not completely. The projections by ZenithOptimedia and research by Forrester and other firms clearly show that digital marketing, content marketing, social media marketing, and inbound marketing are the fastest growing segments of the marketing industry. And to some extent anyway, they are growing at the expense of more traditional marketing methods and tactics.

It's also clear, however, that many companies - particularly consumer products companies and large B2B firms - are not close to abandoning traditional advertising and marketing methods, even if the effectiveness of those methods is questionable.

I suspect that the relative slowness of change results from a combination of factors.
Whatever the cause, traditional advertising and marketing tactics and methods are likely to be with us for quite some time.
Posted by G. David Dodd at 2:40 PM 5 comments: Links to this post

Over the past few years, two distinct approaches to B2B demand generation have emerged. Both of these models have evolved in response to profound changes in the B2B marketing and sales environment, the most significant of which has been the appearance of empowered buyers.

Business buyers now have access to a wealth of online information, and they are using that information to perform research on their own. As a result, they are much less dependent on sellers than in the past, and they're avoiding interactions with sales reps until later in the buying process. Research by the Corporate Executive Board, SiriusDecisions and others has shown that prospects are often 50% to 60% through the buying process before they engage with a salesperson.

One approach to dealing with empowered buyers is to expand the role of marketing in B2B demand generation. Not surprisingly, the strongest early advocates of this model were providers of B2B marketing automation software like Marketo, Eloqua, Hubspot, and several others. The second approach argues that what is needed is a new sales methodology. The Corporate Executive Board is a strong advocate of this model, and two CEB executives, Matthew Dixon and Brent Adamson, provided a detailed description of this model in their best-selling book, The Challenger Sale.

The "new sales methodology" model emphasizes the continued importance of sales reps in the demand generation process. What CEB and others argue is that salespeople should engage with early-stage buyers and use disruptive insights to change how they think about their business. To use CEB's teminology, these disruptive insights enable sales reps to shape emerging demand rather than simply react to established demand. More importantly, these insights provide value that buyers can't get anywhere else and thus make it necessary (or at least very worthwhile) for buyers to engage with the sales rep.

Which of these demand generation models will ultimately prevail? My answer is neither and both. Neither model will completely win because both will (and should) be used.

Many proponents of both models now recognize the value of the other approach. Advocates of the marketing-centric model now acknowledge that human involvement with early-stage buyers can be very valuable, and CEB is expanding its concept of disruptive insights to include marketing content as well as sales messaging.

The bottom line is that neither marketing nor sales should "own" B2B demand generation. Effective demand generation requires marketing and sales to function as an integrated team.
Posted by G. David Dodd at 5:11 AM No comments: Links to this post

Will Your Marketing Content Help You "Make the Cut?"

I'm not a big fan of professional golf, although I do watch at least part of the four "major" tournaments that are held each year. As I was watching last year's US Open, it occurred to me that B2B demand generation and professional golf have something in common.

As most of you probably know, professional golf tournaments typically consist of 72 holes, with contestants playing four 18-hole rounds over four days. After 36 holes (two rounds) are completed, the tournament field is reduced by eliminating the players with the worst scores. The "cut," as it's called, can sometimes eliminate almost half of the players. To have a chance to win a tournament, the first thing a player must do is "make the cut."

For B2B companies that have complex and lengthy sales cycles, demand generation resembles a professional golf tournament. The buying process can extend for several weeks to several months and typically includes multiple buying stages. At several points along the purchase journey, prospects make decisions about which potential suppliers to consider. If your company doesn't "make the cut" at any of these decision points, you won't be in the game when the final buying decision is made.

The critical point here is that prospects are increasingly making these decisions before they've had a person-to-person interaction with anyone in your company. According to research by the Corporate Executive Board, SiriusDecisions, DemandGen Report, and others, the average prospect is 50% to 60% through the buying process before he or she meets with a sales rep.

So how do prospects decide which potential sellers to consider? To a great extent, these decisions are based on what prospects learn about and from a potential seller when they take initial steps to get information about the products or services they may be interested in purchasing. This is what Google has called the Zero Moment of Truth.

This new buyer behavior means that what is said about and by your company online plays a critical role in your demand generation success. While you can't control what others say about your company, you can control the quality of the content you publish. If the content you provide demonstrates that you understand your prospects' problems and that you have the requisite expertise to help solve those problems, your odds of beginning a meaningful sales conversation with those prospects will be a lot higher.

What about your marketing content? Will it help you "make the cut" and stay in the game as your prospects move closer to a buying decision?
Posted by G. David Dodd at 7:24 AM No comments: Links to this post

What is a "Sales-Ready Lead?"

One of the most important requirements for an effective B2B demand generation system is a clear understanding of who constitutes a sales-ready lead. Decribing who is a sales-ready lead is the essential starting point for defining the roles and aligning the work of marketing and sales. In an optimized demand generation system, marketing is primarily responsible for acquiring new leads and for nurturing leads until they are sales ready. Once a lead becomes sales ready, sales assumes the primary responsibility for managing that relationship.

The term sales-ready lead can be found in many books, articles, and blog posts, but it's surprisingly difficult to find a definition that's really useful. I'll offer one momentarily, but first it's important to understand what a sales-ready lead is not. A raw inquiry does not constitute a sales-ready lead. A raw inquiry is someone who has shown only a minimal level of interest in what you offer. He or she may have responded to an outbound lead generation campaign or visited your website and filled out a registration form, but that's it. The problems caused when marketing passes raw inquiries to sales have been widely discussed in the demand generation literature, so I won't repeat them here.

Sales ready is also not equivalent to ready to buy. Some people suggest that sales-ready leads are only those leads who are fully qualified using tradtional BANT criteria. In an earlier post, I discussed why BANT is no longer an effective framework for qualifying leads. The basic problem with BANT is that some of the criteria will not be met until near the end of the buying process, and in addition, it can be impossible for any individual lead to satisfy all of the BANT requirements.

A sales-ready lead, therefore, falls somewhere between a raw inquiry and a BANT-qualified lead. Here's my proposed definition:

A sales-ready lead is an individual who (a) is affiliated with a qualified prospect, (b) can make or influence the decision to purchase your product or service, and (c) is sufficiently interested in exploring solutions to engage in a meaningful sales dialog with a sales rep. In this definition, the term qualified prospect means an organization that has a need your company can address and falls within your defined target market.

This definition provides a good starting point, but I also think it's important to use some specific criteria for identifying sales-ready leads. The table below shows eleven criteria that I suggest are appropriate for most companies. The first four criteria apply to the prospect organization, and the remaining criteria apply to the individual lead. 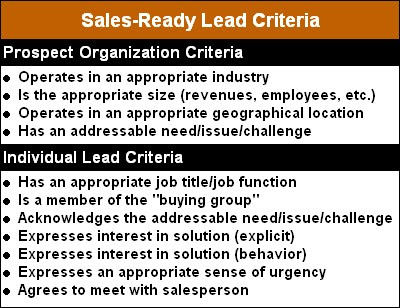 OK, that's how I define sales-ready lead. How about you? How would you change my definition? Would you use an entirely different approach?
Posted by G. David Dodd at 9:47 AM 1 comment: Links to this post