Eccolo Media recently published its 2014 B2B Technology Content Survey Report. The 2014 report describes the findings of Eccolo Media's sixth annual survey of technology buyers. All of the respondents in the 2014 survey were responsible for influencing or making technology buying decisions in the six months prior to the survey.

As with the previous Eccolo Media surveys, the 2014 survey (conducted in the fall of 2013) focused on what types of content resources technology buyers used in making purchase decisions, which types of resources they considered most influential, and how they consumed content during the buying process.

The 2014 survey findings reveal the continuing importance of "traditional" content formats (white papers, case studies, etc.) and the growing use of newer formats such as webinars, social content, and web slideshows. 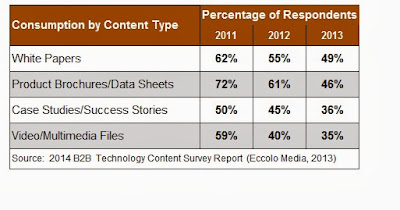 In my view, these statistics do not mean that white papers, brochures, case studies, and videos are becoming less critical to effective marketing. What's happening is that B2B companies are offering content in an ever-increasing number of formats, and buyers are taking advantage of the expanded options to consume content in the format they prefer. Therefore, the percentage of buyers consuming a particular type of content can decline, as buyers use a greater variety of content formats.

The second surprise in the Eccolo Media report was an apparent drop in the influence of content. The authors of the report noted that in the 2010 survey, 41% of respondents said that white papers were very or extremely influential. That percentage increased to 65% in 2011, then dropped to 57% in 2012, and fell to 50% in 2013. The report authors said they saw similar results in other content categories.

These findings do not indicate that content is becoming less influential. In fact, research by other firms has demonstrated that content is becoming more influential in the B2B buying process. What has occurred is that buyers have become more discriminating when it comes to content. The growing popularity of content marketing means that buyers have access to more content than ever before, and they are more willing than ever to distinguish between good content and bad content. Only content that provides real value will be viewed as influential.

The Eccolo Media survey also provides insights on this aspect of the influence issue. The survey asked respondents about their likes and dislikes in white papers, case studies, and videos. Here's how the report authors described what respondents dislike in white papers:

"Respondents are most disappointed by too much focus on vendor or product information. That's supported by recent findings from other studies. Technology buyers rate 'too much marketing hype,' 'lack of truly independent, unbiased information,' and 'information is too general' as their top three content problems, according to IDG Enterprise."

The most important takeaway from this report is that B2B companies must continue to produce compelling white papers, case studies, and other "traditional" forms of content, but that it's also critical to offer content in several of the "newer" formats.
Posted by G. David Dodd at 5:49 AM