Measuring return on marketing investment (MROI) has been a major point of emphasis in many companies for the past several years. So by now, you would think that the process for calculating MROI is well understood. Unfortunately, I still see far too many examples of MROI that has been calculated incorrectly - in many cases, by people who should know better.

One of the most common and serious mistakes is the use of increased revenues (sales) rather than increased profits when calculating MROI. To illustrate this error, take a look at the following table. I based this table on an example ROI calculation that appeared on the website of a well-known national provider of direct mail services. I won't name the company because they are only one of many companies that use this methodology. 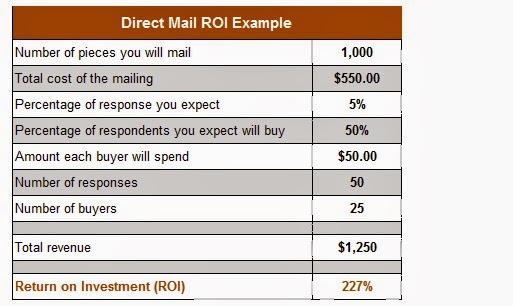 In this example, Return on Investment (ROI) was calculated by dividing Total revenue ($1,250) by Total cost of the mailing ($550), resulting in an ROI for the mailing of 227%

That ROI number looks fantastic, but the problem is, it's flat out wrong. Way wrong.

The basic formula for calculating ROI is:

For ROI purposes, Gain from Investment is the incremental gross profit (gross revenues less cost of goods sold) produced by a marketing investment, as illustrated by the following "waterfall" diagram. 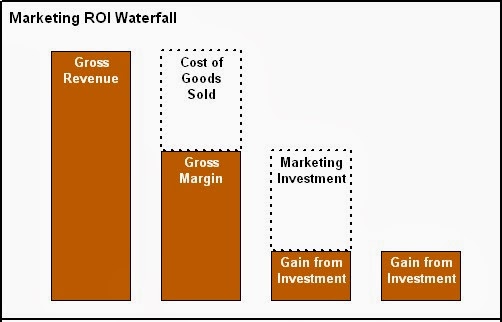 Using incremental sales or revenues in the marketing ROI calculation distorts ROI because most marketing campaigns or programs are designed to increase sales volume. And increases in sales volume are not free - there are always costs associated with producing and delivering the additional products or services. (Note:  If a company has extremely high gross profit margins, using revenues to calculate MROI can be relatively accurate. For example, computer software companies can have high gross profit margins because the cost of producing an additional copy of the program is negligible. However, this situation is the exception, not the rule.)

The first problem with the methodology used in the direct mail example is that it bases ROI on revenues rather than gross profits. If the cost of goods sold of the products covered by the example is 50% of the selling price, the incremental gross profit produced by the direct mail program would be $625 (total revenue of $1,250 X 50%). Using incremental gross profit causes the ROI to drop from 227% to just under 114% ($625 / $550). That's a more accurate ROI calculation than the one used in the original example, and it's still an impressive number, but it's also still wrong

So, the real ROI produced by the direct mail program would be calculated as follows:

It should be clear that inaccurate calculations of MROI can lead to unprofitable marketing decisions. Equally important, they can also undermine marketers' credibility with senior company leaders. Would you want to tell your CEO and CFO that a marketing campaign has an ROI of 227% when the real ROI is 14%?

The moral of the story is:  If you're going to calculate MROI, be sure to calculate it correctly.
Posted by G. David Dodd at 6:58 AM