Marketing Budget Shifts From Traditional to Digital Are Slowing

For most of the past decade, numerous research studies have documented two clear marketing trends:


Two recent studies indicate that the reallocation of spending from traditional advertising and marketing to digital marketing channels and tactics is slowing.

The first study to reveal the slowdown is the latest edition of The CMO Survey from Duke University's Fuqua School of Business. The CMO Survey has been conducted semi-annually for the past several years. In the February 2014 survey, CMO's on average predicted an 8.2% increase in digital marketing spending over the next 12 months. In the two surveys conducted in 2013, CMO's projected increases of 10%, which was down from projected increases of 11.5% in the August 2012 survey and 12.8% in the February 2012 survey.

The chart below shows the projections for both digital marketing and traditional ad spending from August 2011 through February 2014. 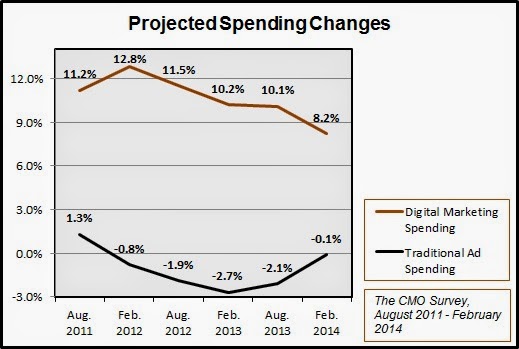 The second study is the 2014 SoDA Report by the Society of Digital Agencies. The SoDA study was based on a survey of global digital marketing decision makers and influencers. Forty-two percent of the respondents were from corporate brands, while 43% were from agencies and production studios.

These studies suggest that the dramatic shift from traditional to digital marketing channels and tactics is slowing, at least. Marketing thought leaders have been predicting the demise of traditional advertising and marketing tactics for more than two decades, but that clearly hasn't happened. It's unlikely that large brands will completely abandon TV and radio advertising in the foreseeable future. It's more likely that we are approaching some kind of equilibrium as marketers fine tune their marketing investments to match customer preference patterns.