More Insight on the Content Preferences of B2B Buyers

DemandGen Report recently released the results of its 2014 B2B Content Preferences Survey. The 2014 survey received responses from 105 buyers of B2B products and services. It asked survey participants about their use of content in making purchasing decisions. About 38% of the survey respondents held C-level or VP-level positions at their companies, while almost 27% held director-level positions.

The results of the 2014 survey are not terribly surprising. For the most part, they are similar to the findings of DemandGen's 2013 content preferences survey, and they are also similar to the results of several other research studies, such as the 2014 B2B Technology Content Survey conducted by Eccolo Media. Still, the 2014 DemandGen survey provides several insights for B2B marketers. Here are a few of the survey's major findings:


The authors of the DemandGen survey report noted that the popularity of white papers fell by 5% in 2014. However, the survey also revealed that B2B buyers still rate white papers as the most valuable type of content. The 2014 survey included this question:  "What do you feel are the most valuable online content formats for researching B2B purchases? (rate on a scale of 1 to 5 with 1 = most effective)" The table below shows the percentage or respondents giving each content format a "1" rating. 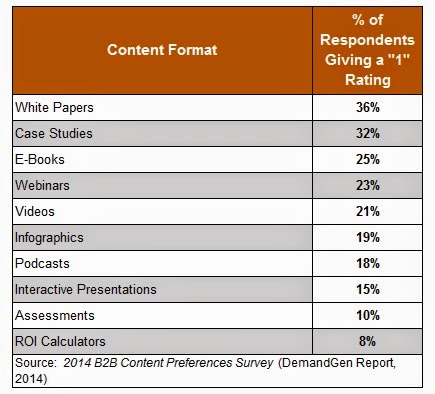 One important takeaway from the DemandGen survey results is that white papers authored by third-party experts are still one of the most powerful and effective types of marketing content that B2B companies can use.

You can get a copy of DemandGen's 2014 B2B Content Preferences Survey report here.
Posted by G. David Dodd at 7:47 AM