The Continuing Power of Traditional Marketing

In a recent blog post, I argued that predictions of the impending demise of traditional advertising and marketing techniques and channels have been overstated for more than two decades. I also suggested that companies are still using traditional tactics and methods because they are still relatively effective, contrary to what some prognosticators have asserted.

Traditional advertising and marketing methods still work because they benefit from several deeply-ingrained characteristics of human judgment and decision-making that haven't changed much despite the recent profound changes in how we humans access information and communicate.

After I wrote and published my earlier post, I discovered recent research that includes persuasive evidence regarding the continuing power of traditional advertising and marketing techniques and channels. The Deloitte Digital Democracy Survey explored how the adoption of new communications technologies and devices is changing media consumption habits and preferences. The Deloitte survey involved almost 2,100 US consumers and was fielded in November 2014.

The Digital Democracy Survey addressed a broad range of issues, including the ownership of various digital devices, the perceived value of various communications/content services, and the time spent consuming various types of content on various types of devices. 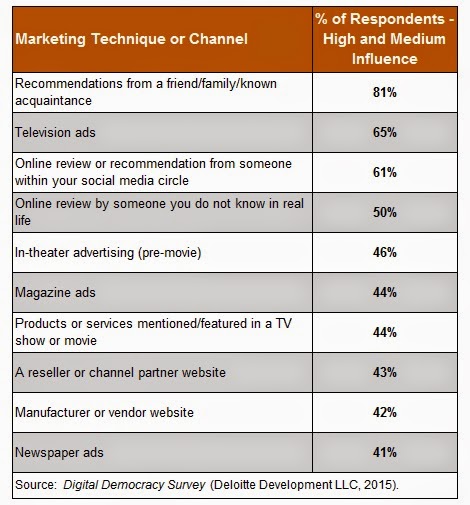 Recommendations from a friend/family/known acquaintance earned the top spot in the ranking, but what stands out in these results is that five of the top ten most influential tactics or channels - television ads, in-theater advertising, magazine ads, product placements, and newspaper ads - are traditional methods by almost any definition.

The Deloitte research was a consumer survey, and it's likely that a survey of B2B buyers would produce somewhat different rankings. For example, I would expect business buyers to rank the influence of vendor websites higher than is shown in the above table. Nevertheless, the results of the Deloitte survey clearly demonstrate that traditional advertising and marketing methods still wield significant influence with potential buyers.
Posted by G. David Dodd at 7:41 AM