Interactive content has become an integral part of the marketing efforts of many B2B companies, according to a 2016 survey conducted by the Content Marketing Institute and sponsored by ion interactive.

For this survey, CMI defined interactive content as "content that engages participants in a two-way dialogue or exchange, often providing utility and usefulness . . ." Some of the more popular types of interactive content include assessments, calculators, contests, quizzes, and interactive infographics, e-books, and white papers.

The majority of interactive content users in the CMI survey said that it provides several significant benefits. The following table shows the percentage of user respondents who agreed or strongly agreed with six benefits statements: 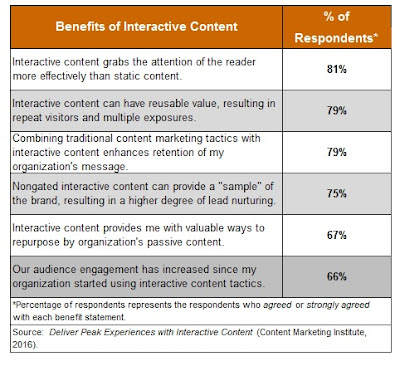 The findings of the CMI research reinforce the results of earlier research by other firms. For example: