How Small and Mid-Size Companies Will Practice Marketing in 2017

Target Marketing magazine recently published the findings of its annual "Media Usage Survey," which was designed to identify marketing spending plans for 2017. The survey was conducted in December 2016 and produced 725 responses from members of the audiences of Target Marketing and subscribers to Total Retail and NonProfit Pro magazines. The researchers suppressed participation by list services firms and creative services/advertising agencies so that all responses would be from marketers.

Target Marketing also asked survey participants about the allocation of their marketing budget. The top four media categories identified by survey respondents were:
The report's authors noted that print experienced the biggest year-over-year change, falling from 29%  of the total marketing budget in the 2016 edition of the survey. 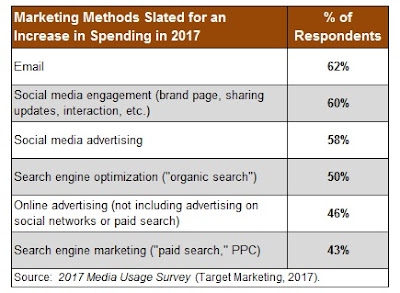