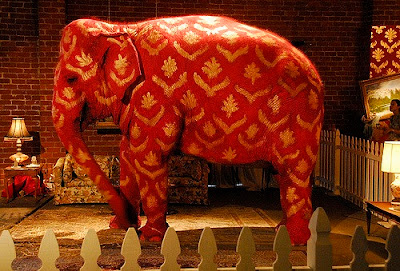 Early in my consulting career, I worked with a small company that was owned and managed by a husband-wife team. The business had been fairly successful for most of its ten-year history, but when I began working with the company, it had been losing money for more than a year, and was on the verge of going broke.

In the course of interviewing the owners and many of the company's employees, the core problem became apparent. The husband-owner was having an affair with one of the employees. At that time, the affair had been going on for about two years. The wife-owner and many of the employees knew about the affair, but no one openly acknowledged it, and no one talked about it, except through veiled innuendos. Though it was never mentioned, the affair was undermining the success of the company.

Elephants in the room frequently exist in a business setting when:


When faced with these kinds of issues or problems, we humans tend to put on a brave face, keep doing what we've been doing, and hope for the best. Another appropriate idiom might be "whistling past the graveyard." The only way to deal with an elephant in the room is to get past the conspiracy of silence, discuss the issue or problem openly, and make an informed decision regarding what to do about it, all of which is easier said than done.

Elephants in the room can affect any part of a business, and marketing is no exception. If we look carefully, we can easily identify several elephant-in-the-room issues that are negatively affecting the performance of B2B marketing. We marketers tend to down play, gloss over, or ignore these issues because they are difficult to address, often require "radical" solutions, and in some cases, aren't completely within our control.

There's no doubt that the practice of B2B marketing has changed dramatically. We now have marketing capabilities that were unheard of only a few years ago. But there are also some elephant-in-the-room issues that we must address if we want to maximize the productivity of our marketing efforts. In short, we need to make 2018 the year that we name and tame the elephants in the room.

In several future posts, I'll be discussing some of these elephant-in-the-room issues, and I would love to hear your thoughts on these important issues.

Illustration courtesy of Bit Boy via Flickr CC.
Posted by G. David Dodd at 6:23 AM