Where Marketers are Missing the Mark with Customers 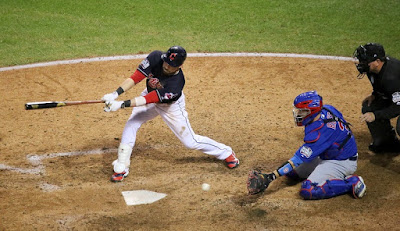 The New York chapter of the American Marketing Association has just published a research report that should be required reading for marketers. The Techlash is Here report addresses several aspects of marketing in the world's two largest economies - the United States and China. While the findings about China are interesting, this post will focus on the U.S. results.

The U.S. part of the research consisted of two quantitative surveys and several interviews with marketing leaders. One survey included 502 marketing executives - about 200 from agencies and approximately 300 from brand owners. The second survey polled 508 U.S. consumers. The consumer sample was matched to population data through weighting.

This research revealed two significant disconnects between U.S. consumers and U.S. marketers, one pertaining to social media, and one relating to the appetite for, and concerns about, new marketing technologies and practices.

According to Investopedia, a bubble is "created by a surge in asset prices unwarranted by the fundamentals of the asset and driven by exuberant market behavior." The AMA New York surveys suggest that a different kind of bubble may exist in the social media marketing space.

In the consumer survey, respondents said they expect their use of social media to decline over the next three years. The net change (the proportion of respondents expecting to spend more time on social media minus the proportion who expect to spend less time) was -6%. The survey also found that Facebook use is likely to show no net growth over the next three years, while the use of Twitter, Snapchat, and LinkedIn will decline over that period.

U.S. marketers, on the other hand, plan to substantially increase spending on social media advertising over the next three years. In the marketer survey, social media generated the strongest indication of increased spending (net 68%), followed by web display ads (net 51%) and email (net 47%).

Other research has found a similar exuberance for social media among marketers. In the August 2019 edition of The CMO Survey, respondents said they expect spending on social media to increase from 11.9% of their current marketing budget to 22.5% of the budget in five years.

The Techlash is Here report describes the emerging social media marketing bubble (my term, not theirs) as follows:

"American marketers are overindexing on many social media now and plan to increase spending even as consumer use flatlines or falls off. Currently, the share of ad spend devoted to social media in America . . . is 150% of the proportion of consumer media time they receive."

The AMA New York surveys also investigated the attitudes of U.S. marketers and consumers about nine specific marketing/advertising technologies and techniques. In this research, between two-fifths and three-fifths of U.S. marketers said they plan to increase their use of every one of those nine innovations, as the following table shows: 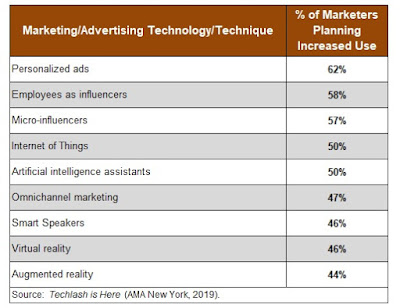 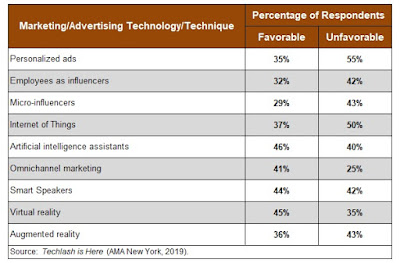 Once again, the survey report describes the current situation in compelling terms:

The AMA New York research should serve as a wake-up call for marketers. It highlights the risks inherent in getting caught up in the hype that inevitably surrounds new marketing channels, techniques, and technologies. While this research dealt with important disconnects between marketers and consumers, many of the study findings will apply to B2B marketers and business buyers.

Marketers' exuberance for new technologies and techniques is often attributed to the fear-of-missing-out or the shiny object syndrome. This view is overly harsh, but it does contain some truth. FOMO can actually be a positive thing when it motivates us to experiment and test new tactics and tools. But if it isn't tightly controlled, FOMO can also result in bad - or at least ineffective - marketing investments.

The findings of the AMA New York research regarding personalization are particularly noteworthy. As I have previously written, marketers are facing a true conundrum regarding when and how much personalization should be used. In fact, I would argue that the personalization-privacy paradox will be an "elephant-in-the-room" issue for marketers in 2020. I'll have more to say about that in a future post.

With Personalization, Less Can Be More

The Growing Personalization Conundrum for Marketers
Posted by G. David Dodd at 4:24 AM