The Welcome Decline of "Marketing Myopia" 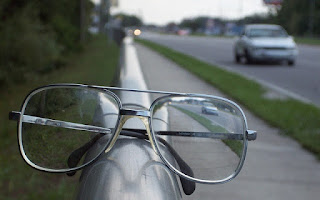 In 1960, Theodore Levitt wrote a landmark article for the Harvard Business Review titled "Marketing Myopia." Forty-four years later, HBR editors commented that Levitt's article "introduced the most influential marketing idea of the past half century."

Levitt's central argument was that companies will cease to grow if they define their business too narrowly - in terms of specific products or services rather than in terms of customer needs. In one of the most memorable passages in the article, Levitt argued that railroads were in decline "because they assumed themselves to be in the railroad business rather than in the transportation business."

For the past few years, I've argued that many marketers are now afflicted with a new strain of marketing myopia, one that is characterized by an almost exclusive focus on marketing communications and the technologies that support them. As practiced in many companies today, marketing means marketing communications and not much more. In terms of the venerable 4P's model of the marketing mix, many marketers are devoting almost all of their time and energy to promotion, and they have largely ceded responsibility for product planning, pricing, and distribution (place) to other business functions.

Recently, I've seen some evidence suggesting that the new strain of marketing myopia may be on the decline. Earlier this year, the Association of National Advertisers (in association with McKinsey & Co. and GfK) conducted a study that primarily focused on the disruptive forces that marketing organizations are facing. The study included a survey of marketing professionals that was fielded in July and August of 2015 and generated 384 responses.

In this study, survey participants were asked to indicate their level of agreement with ten statements that described how marketing's role in their organization could be expanding. The table below shows the percentage of survey respondents who "strongly" or "somewhat" agree with each statement. Percentages shown in red indicate significant increases compared to the 2014 edition of the survey. 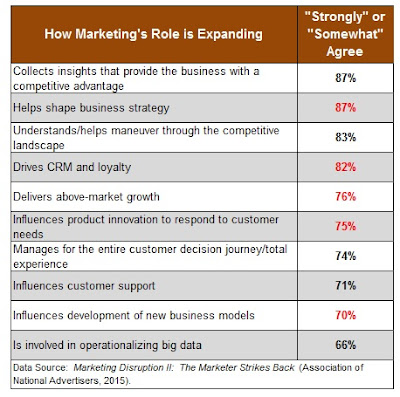 These survey results suggest that marketers are taking a bigger role in shaping business strategy and in designing new products or services and new business models. Hopefully, these findings indicate that the attitudes about marketing are changing in many enterprises.

The "prime directive" of marketing should be to develop a deep understanding of potential customers, including their needs, goals, desires, and behaviors. Marketers use this understanding to craft more effective communications with customers and prospects, but these same "marketing" insights should also be used to guide the design, development, distribution, and pricing of products and services that will win in the marketplace.

Top image courtesy of Daniel Olnes via Flickr CC
Posted by G. David Dodd at 6:23 AM