The new SiriusDecisions Demand Unit Waterfall has received lots of accolades since its introduction this spring, and the accolades are richly deserved. But one of the new demand stages should be labeled Use With Caution.

In May, SiriusDecisions unveiled the latest iteration of it venerable Demand Waterfall with great fanfare. SiriusDecisions calls the new version the Demand Unit Waterfall, and it's depicted in the following diagram: 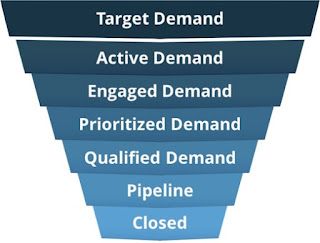 The first version of the Demand Waterfall was introduced in 2006, and over the past decade, thousands of B2B companies have used the waterfall model to track and manage their demand generation efforts. So it shouldn't be surprising that the introduction of the Demand Unit Waterfall has generated quite a bit of interest in the B2B marketing world. Here's a small sample of the reactions from pundits and practitioners:


For an in-depth discussion of the new Demand Unit Waterfall, I recommend that you watch the recording of this SiriusDecisions webinar.

The early reaction to the Demand Unit Waterfall has been overwhelmingly positive, and I agree with those who say that it more accurately reflects the realities of B2B demand generation.


Use Caution With "Active Demand"
My biggest reservation about the new Demand Unit Waterfall is the possible implications of the Active Demand stage. SiriusDecisions defines Active Demand as the demand units that are showing evidence of acute need or buying intention. In other words, Active Demand refers to demand units that are currently "in-market" for the type of solution you sell.
SiriusDecisions analysts are suggesting that companies should focus their outbound demand generation activities on in-market prospects. Not surprisingly, this is the approach also advocated by many providers of B2B predictive analytics software.
This approach may work for some types of B2B companies, but it won't work for all. Here's why.
The identification of in-market prospects relies heavily on the use of intent data, which is data regarding the online behaviors of potential buyers. Intent data - particularly third-party intent data - can be valuable for some types of B2B companies, but it can be almost useless for others. To learn more about the limitations of intent data, take a look at this post by Jingcong Zhao at the Marketo blog, this post by Todd Berkowitz at the Gartner blog, and this white paper by Infer.
The bottom line is, business and marketing leaders should be cautious about relying on their ability to accurately identify in-market buyers. And they should be particularly cautious about focusing all - or even most - of their marketing efforts on such buyers. I've discussed this issue in two earlier posts. If you'd like to see my view on this issue, take a look at Why B2B Marketers Need to Care About "Casual Learning" and Why Marketers Shouldn't Go All In on In-Market Buyers.
Posted by G. David Dodd at 5:23 AM