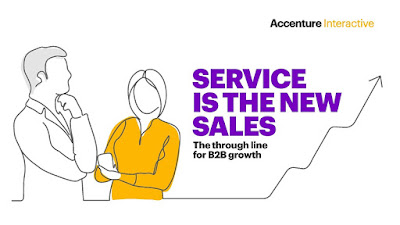 A recent report by Accenture Interactive provides several interesting insights on both the fragility of B2B seller-buyer relationships and what B2B companies need to do to strengthen long-term customer relationships. Service is the new sales was based on interviews with 748 business buyers and 1,499 B2B sellers across 10 countries and 16 industries.

All of the study respondents were directly involved in (or had oversight of) their company's buying or selling strategy or processes. About 75% of the respondents were manager-level or above, and about 25% were C-level. All the companies represented in the research had annual revenues of at least $25 million.

When Accenture asked buyers why they had switched (or plan to switch), the three top reasons - each identified by 25% of the study respondents - were:


This finding indicates that business buyers are a pragmatic group, and it suggests that, before anything else, B2B sellers need to be sure they are getting the basics right.
On a more positive note, half of the buyers interviewed by Accenture said they had increased their average number of items per purchase and grown average purchase values with those sellers who met their needs and helped them succeed.
The Accenture research also sought to identify important attributes and behaviors of B2B "leaders," as compared with "laggards." The report does not provide a precise definition of "leaders" and "laggards," but it does describe how Accenture made the distinction:
"To discern the leaders from the laggards, we weighted responses to 12 questions from the sellers' survey across three key pillars of B2B transformation:  organizational strategy, activities, and infrastructure. To give a robust and accurate picture of the global state of buyer-seller relationships, greatest weighting was given to questions reflecting the objective and measurable elements of B2B sales and service."
With this "definition" in mind, here are some of the major differences between leaders and laggards that the Accenture report highlights.
Personalization - Leaders were twice as likely as laggards to track buyer behavior and more likely to make personalized offers based on "the sum of all behaviors." The Accenture study found that leaders consistently offered greater personalization at all stages of the customer journey.
Digital and Human Interactions - Laggards tended to prioritize digital sales channels over channels with a human touch. Leaders, on the other hand, emphasized interaction channels that provide a dialogue with buyers. This includes digital channels such as chatbots and traditional sales reps and call centers.
Organizational Commitment - Leaders were more likely than laggards to view customer experience as an ongoing work-in-progress rather than as a one-time effort. Seventy percent of leaders said that providing good service and experiences had been a top or high priority in their company for at least three years.
Functional Integration - Forty-eight percent of leaders said they had fully integrated marketing functions across channels, compared to only 19% of laggards. Leaders were also more likely than laggards to have partially or fully integrated their sales and marketing teams.

The Accenture report also highlighted the benefits of being in the leader category. Ninety-seven percent of the leader respondents said they had gained market share, 96% reported higher profitability, and 90% said they had won a greater share of their customers' wallets.

This research also confirmed the importance of blending digital and human-to-human interactions to build and sustain strong customer relationships.

Where Marketers are Missing the Mark with Customers

What Communication Channels Do Customers Prefer? It Depends!

With Personalization, Less Can Be More

Where Customer Experience Stands in 2019