Measuring the Maturity of Marketing Operations 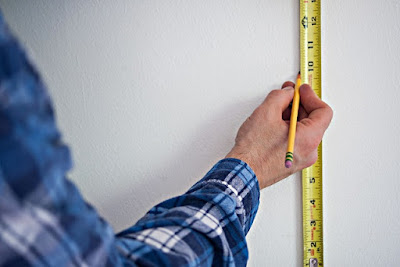 A recent survey conducted by Econsultancy in partnership with Sojourn Solutions provides several valuable insights regarding the state of marketing operations (MOPS) at large and mid-size B2B companies.

Sixty-three percent of the survey respondents were located in North America, and 32% were based in the U.K. All respondents were manager level or above, and all described themselves as either a member of their company's marketing operations team (45%) or very familiar with its operations (55%).

Econsultancy broke survey respondents into two groups, and the survey report provides data for each of these groups. Top Performers were the respondents who reported that their marketing function exceeded it top business goal in 2018. Top Performers accounted for one-third of the total survey panel. The remaining two-thirds of the survey sample were called Mainstream respondents.

The differences between Top Performers and Mainstream respondents revealed by the survey results are both significant and consistent. The following table contains nine of the performance benchmarking statements Econsultancy included in the survey. The table also shows the percentage of Top Performers and Mainstream respondents who said that each statement was fully or mostly true for their marketing operations function. 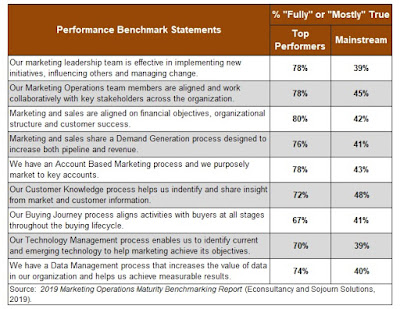 Econsultancy captured the essence of the difference between Top Performers and Mainstream organizations in these terms:

"Relative to their mainstream peers, top performers are further along in the marketing operations evolution in every measure. This striking consistency reflects the interconnected nature of modern marketing; few disciplines within MOPS can exist independently. Top performers are far more likely to have reached a point of marketing-led change, effective implementation or cultural acceptance across a variety of measures."

The Econsultancy survey provides several interesting insights about the maturity of MOPS at B2B companies, but there are a couple of things to keep in mind about this research. First, the survey only produced 171 total responses, which means that the Top Performers group contained fewer than 60 respondents. We should be cautious about giving a great deal of weight to data derived from such a small survey sample.

I wish Econsultancy had divided these respondents into separate groups for reporting purposes because that would have provided a good picture of the attributes of "average" performers. I suspect that the gaps between the "average performers" and the Top Performers would be narrower, while the gaps between the Top Performers and the laggard group (those who missed their top 2018 goal) would be even wider.

Top image courtesy of Personal Creations via Flickr CC.
Posted by G. David Dodd at 4:09 AM