Why Marketers Should Be Preparing for Robust Economic Growth 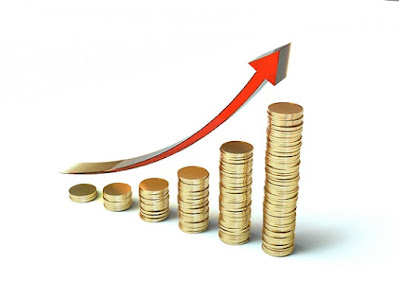 Back in January, I wrote that B2B marketers should use a quarterly approach to planning in 2021 so that they are able to adapt to changing business conditions. Specifically, I recommended that marketers develop a revenue forecast for each quarter of the year and finalize the forecast in the month before the beginning of each quarter. Then, marketers can lock down their marketing plans for the coming quarter based on the final revenue forecast.

Marketers using a quarterly approach to planning in 2021 should be finalizing their revenue forecast for the second quarter within the next few days. The purpose of this post is to take an updated look at the prospects for the U.S. economy for the rest of this year. The good news is, the outlook for the economy has improved considerably over the past several weeks, and marketers need to be ready to take full advantage of robust economic growth over the balance of 2021.

In 2020, economic and business conditions were tightly linked to the state of the COVID-19 pandemic and the public health measures implemented to mitigate the spread of the virus. That linkage will continue this year, but with very different results.

The state of the pandemic has improved dramatically over the past several weeks.

There are still concerns about the virus "variants" that have already been identified and about the possibility of additional mutations appearing in the coming months. So far, however, it appears that the three vaccines approved for use in the U.S. will be effective against the known virus variants.
Because of these developments, there is now a widespread belief that the pandemic will be brought under control in the near future, and this is driving expectations for an accelerated economic rebound. As a result, many economists have recently raised their forecasts for the performance of the U.S. economy in 2021. Here are two examples.
The Conference Board Forecast
The Conference Board (a non-partisan economic and policy think tank) publishes a monthly forecast for the U.S. economy. The following chart compares the forecasts for real GDP growth in 2021 made by The Conference Board in December of last year and February of this year. 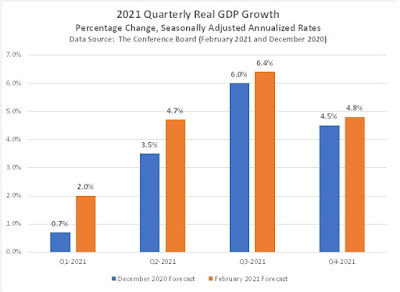 As this chart shows, The Conference Board has raised its forecast for real GDP growth in all four quarters of this year. The largest increases are in the first two quarters of 2021, which indicates The Conference Board's economists now believe the economic recovery is progressing faster than they previously anticipated.
For the entire year, The Conference Board expects real GDP to grow 4.4%, and it expects the U.S. unemployment rate to fall to 5.0% in the fourth quarter. The Conference Board is now projecting that the monthly output of the U.S. economy will return to pre-pandemic levels in July of this year.
The Conference Board's February forecast is based on four assumptions:
The Congressional Budget Office Forecast
The U.S. Congressional Budget Office issued a new economic forecast in February of this year. In this forecast, CBO projects that real GDP will grow 4.6% in 2021, and that the unemployment rate will fall to 5.3% in the fourth quarter of this year.
CBO noted that it was projecting a stronger U.S. economy in 2021 (compared to its July 2020 forecast), ". . . because the downturn was not as severe as expected and because the first stage of the recovery took place sooner and was stronger than expected . . ." CBO is now forecasting that real GDP will return to its pre-pandemic level in mid-2021.
It's important to note that CBO's forecast does not factor in any impact from President Biden's $1.9 trillion COVID relief proposal.* The forecast assumes, " . . . that current laws governing federal taxes and spending (as of January 12, 2021) generally remain in place and that no significant additional emergency funding or aid is provided . . ." (Emphasis added)
Many Economists are Even More Optimistic
Many economists are even more optimistic about economic growth in 2021 than The Conference Board and the CBO. For example:
Marketers, Get Ready for Growth
As I wrote back in January, the biggest challenge for marketers this year is to align their level of marketing activities and spending with business conditions that are likely to be evolving rapidly. The economic forecasts described above suggest that the U.S. economy is poised to generate robust growth in 2021. So marketers need to be preparing now to take advantage of the expected growth.
*On March 6th, the U.S. Senate passed its version of President Biden's $1.9 trillion COVID relief package. The Senate's version differs from the version previously passed by the U.S. House of Representatives. Therefore the House will need to approve the Senate version, and the House is expected to vote on the measure on March 9th.
Top image courtesy of ccPixs.com (CC).
Posted by G. David Dodd at 3:49 AM